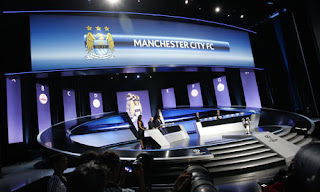 After last night’s heavily lavish draw at the Grimaldi Forum in Monaco, there were certain reflective sets of emotions displayed by clubs in the draw. There was also a collective consensus on one of the hosts (the bald guy) on him being an annoying & irritating comedian rather than an equitable host.

Anyways, as it goes on paper, Manchester United was the only team to come off with an easier group of opponents (Benfica, Basel & Otelu) than any other groups. Manchester City’s first ride in the Champions League will not be an easy one as they were paired with Bayern, Villareal and Napoli – All capable of upsetting each other.Two of my other favorites were drawn with each other as well. Barcelona and Milan will sure to bring about a good battle between each other.  Arsenal has an easier group on paper but if you look at the stats between the clubs, it is paired with Greek and German champions, Olympiacos and Dortmund, respectively. The other team in the group is Marseille, which ended up second in the French league last year. Will be tough for a team that just barely qualified, and my strong opinion of the team continues.
However, it is good to see a mixture of new entries after a long time in this year’s championship with teams such as Trabzonspor (thanks to Fenerbache’s involvement in matct-fixing), Lille and Genk to name a few.

Hopefully, City will be able to achieve similar success that of Tottenham last year.