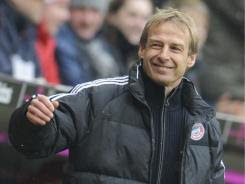 Jurgen Klinsmann, the free scoring and prolific striker, considered as one of the best in the industry for his natural scoring capabilities. Had a good track record with his first gig as a professional coach in 2004 for ze Germans. Took them to a place on the podium in Germany. Good stuff. Could notice the passion of a player within him while he was on the sidelines (more alike to that of Guardiola).
Well, after recently replacing Bob Bradley as the Head coach of USMNT, there were and are a lot of expectations on him. Did come through with a 1 – 1 draw against Mexico, when all eyes were on him. Drew a few criticisms for his style of play but in the end received praises. The question is whether he can take them forward?

Now don’t get me wrong, I think Klinsmann is in a class of his own but did they have to give the boot to Bob Bradley? I think he did an awesome job so far with the team he had. Again, after a long period in charge, one can question the need of a change as the team was not moving forward in the global stage.

Klinsmann, does bring with him the experience of playing at that level. Bradley does not. Klinsmann does know what to expect from his strikers and Bradley did not. In fact, until Altidore, the only lone striker that was evident was McBride. Other than that, players came – players left. The only difference between the two coaches is the level of autonomy they were given in regards to on field matters. I think Klinsmann will be given a lot more of that with his men than what was given to Bradley.

In the end, Bradley played a big and important part in bring the team to a position they are currently enjoying. Whereas, all eyes will be on the new gaffer to see whether he can achieve what he is brought in to do.
Nonetheless, good luck to both men and the USMNT.