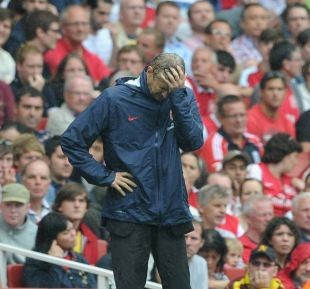 Being an avid Manchester City fan, the fact that Nasri was involved in the game against Liverpool did surprise me. Expected him to show up for the City game against Bolton. Although questionable, the reasons were quite clear from the game. There was just no significant presence for Arsenal in the center of the pitch.

Nasri did show glimpse of brilliance at times but where were the rest of the midfield? Didn’t notice Ramsey playing until the 21st minute. Walcott couldn’t play unless the defense gave him a gap of at least 15 yards. Frimpong, initially seemed like he was there to break legs, but did well until his stupidity took the better of him.Arsenal is considered the team second to Barcelona when it comes playing beautiful football. But based on today’s performance, doesn’t seem like they will hold that label for long. They need to buy players as was quite evident today. Players that are experienced and who are able to maintain a strong presence, especially in the midfield.

Till that happens, I will continue to keep a strong negative opinion on Arsenal and their current style of play this season.